Jacob Zuma has taken aim at Karyn Maughan — a veteran legal writer who has covered the former president’s long foot-dragging to unfreedom — for allegedly disclosing his “medical condition” in her reportage of the various challenges to his medical parole.

Prosecutor Billy Downer, who has hung on for years waiting for the State’s day in court in Zuma’s corruption trial, has also been targeted by the former president, now accused No 1, for his alleged “leaking” of a doctor’s letter to Maughan.

Maughan argued in her founding affidavit that the summons by Zuma is “unlawful, vexatious and a gross abuse of the process of court”.

It had been obtained, said Maughan, “for the ulterior purpose of intimidating and harassing me and preventing me from freely doing my job as a journalist reporting on Mr Zuma’s criminal trial”.

This ulterior motive was apparent from statements and comments made by representatives of Zuma and his close associates, she said, adding: “There are absolutely no prospects of success in respect of the charges Mr Zuma has laid against me.”

Strike one should be that Zuma has not obtained a nolle prosequi certificate from the Director of Public Prosecutions which legally entitles him to institute a private prosecution against Maughan, as required under section 7(2)(a) of the Criminal Procedure Act (CPA) 51 of 1977.

That should be the end of it.

Therefore, Zuma lacked standing to institute the private prosecution under section 7(1) of the CPA in the first place, and had “no substantial and peculiar interest in the issue of the trial since he has personally suffered no injury as a consequence of the offence he alleges I have committed”.

What is Maughan’s alleged sin?

So what legal sin does Zuma claim Maughan has committed?

Where has she indeed disclosed his “medical condition”?

Before we set sail across these murky, treacherous waters, shrouded in a fog of fugitive story-spinning, turn quickly to someone near you.

Ask: “Do you know what Jacob Zuma’s medical condition is? What specifically is he suffering from?”

You will find no specific answer. Nada, zip, zilch.

Where you will find much more detail of Zuma’s ailments is in Arthur Fraser’s own submissions in the high court challenge by the Democratic Alliance, the Helen Suzman Foundation and AfriForum to Fraser’s granting of medical parole to Zuma.

While the medical assessments by Dr LJ Mphatswe of the Medical Parole Advisory Board and Zuma’s personal physician, Dr QSM Mafa, were almost entirely blacked out, there are more details in Mphatswe’s report.

There he describes Zuma’s “life-threatening cardiac and neurological events” as well as “potential surgery” of a “potentially development of a malignant condition arising from a high grade ileocecal and colon lesion exists [sic]”.

Attached to Fraser’s affidavit to the high court was one deposed by Nompumelelo Radebe, employed at the Estcourt Correctional Centre where Zuma was incarcerated on charges of contempt of court in July 2021. This sheds even more light on Zuma’s symptoms.

Radebe also offers insight into the convict ex-president’s first hours in the Estcourt jail and his almost immediate deteriorating state of health.

After the former president arrived in a blue-light convoy and the world caught fire outside, he was “orientated on the rules and regulations of the correctional centre”.

Zuma was told the “stipulated time for unlocking of cells and lock-up. Mr Zuma was further informed that he will have to make his bed and clean his cell.”

The former president was also issued with “two pairs of offender uniform and toiletries” and “an immediate medical assessment had been conducted”.

On 10 July, two days after his incarceration, Radebe said, “I noticed Zuma does not make up his bed nor clean his cell as expected.” 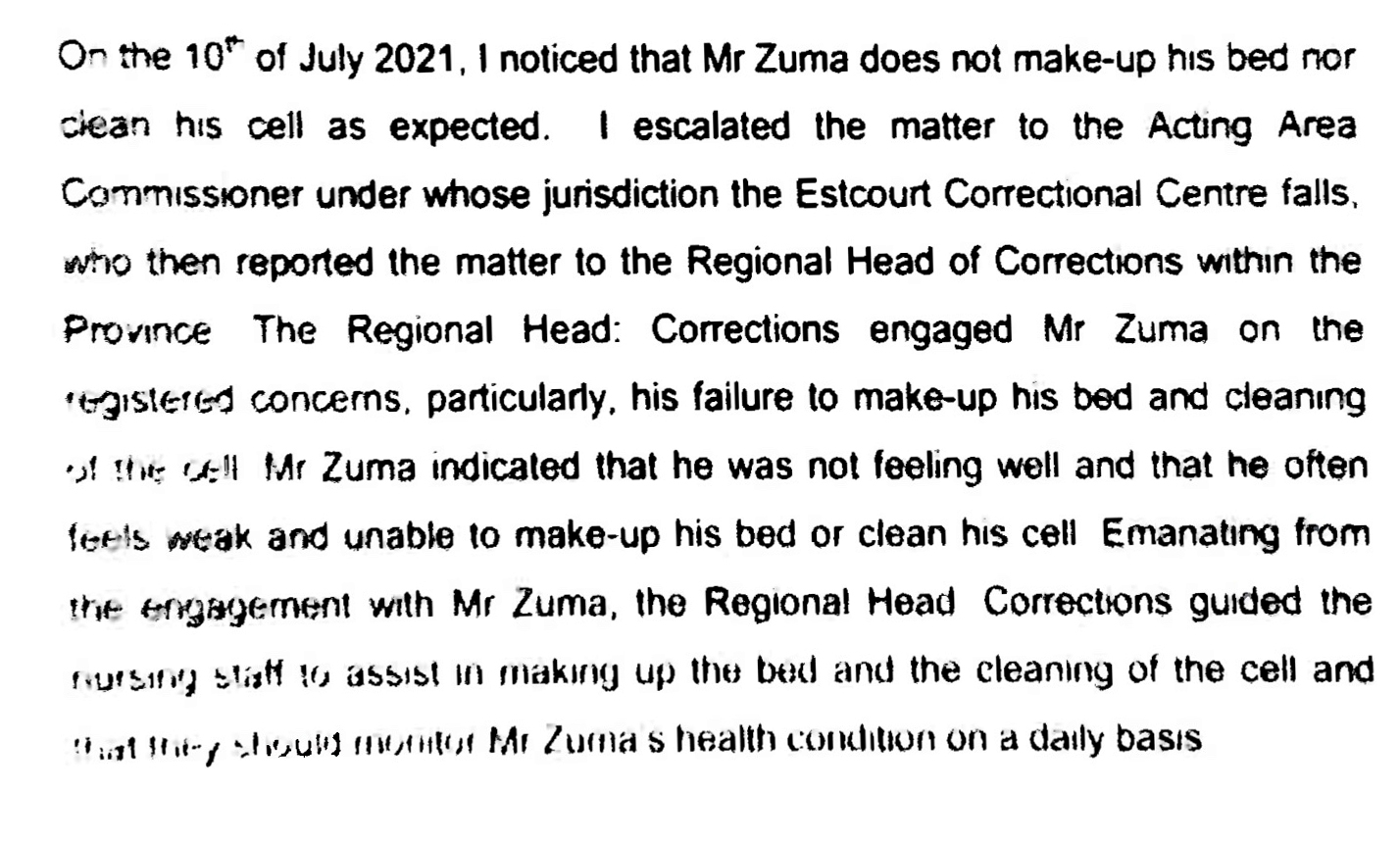 Radebe escalated the matter to her superiors. When asked why he “failed to make up his bed and cleaning of the cell [sic], Mr Zuma indicated that he was not feeling well and he often feels weak and unable to make up his bed or clean his cell”.

The nursing staff were then “guided” to do the domestic work for the former president.

On 21 July, the operational manager of nursing at the prison had registered several concerns about Zuma’s physical state, said Radebe.

These included a “drastic change of complexion, reddish eyes, loss of weight, challenges with his mobility, insomnia, inability to adequately execute his core responsibilities [sic] and swelling of the feet that was very concerning”.

Dr Google might help here with these symptoms and a wild-guess diagnosis.

By 5 August, the team had briefed Fraser, who advised that he had been contacted by a doctor who informed him Zuma would have to be moved to an external hospital for “an urgent medical procedure”.

Zuma was then transferred to the Mediclinic Heart Hospital in Pretoria where he received 24-hour medical care.

On his release, he recuperated at the R5.2-million Waterkloof Ridge home of his wife Bongi Ngema (paid for by the Gupta family) before heading off for the rural tranquillity of KZN.

In her affidavit, Maughan said: “A simple review of the facts — all of which are well known to Mr Zuma and are succinctly set out in a judgment by Judge Piet Koen” made it clear that the charges were without any merit.

Zuma alleged the letter was in the possession of the National Prosecuting Authority at the time and that it had somehow been “leaked” to Maughan.

Maughan said: “The oral request I made to [the advocate] Mr [Andrew] Breitenbach on 9 August 2021 was for copies of the court papers that had been or would be filed for the hearing the following day.”

Court papers are public documents and her request, said Maughan, had been made on the basis of this understanding.

“It is a common practice for journalists to ask attorneys and counsel for public court documents.”

In fact, Mdutywa’s letter said little, apart from that Zuma had undergone “an extensive medical procedure”.

Mdutywa’s letter attached to court papers is far less personally intrusive than those filed by Fraser, with attachments, about Zuma’s health.

Maughan said that her reporting on Zuma’s trial and other politically charged matters had “raised the ire of Mr Zuma and his supporters”.

She had been “repeatedly maligned and threatened, including by members of Mr Zuma’s family and his representatives at the Jacob G Zuma Foundation (‘the Zuma Foundation’) for doing my job”.

On 12 August 2021, shortly after Maughan reported on the postponement of a court matter, Sambudla-Zuma posted a tweet “referencing journalists being beaten up in Sri Lanka together with the following threat: ‘@KarynMaughan Come Look Here’,” Maughan said.

The announcement of the service of Zuma’s summons on Maughan on 6 September was accompanied, she said, “by a torrent of social media abuse directed at me, led by the Zuma Foundation, Mr [Mzwanele] Manyi and Ms Zuma-Sambudla”.

Maughan said that over the years she had been “subjected to varying degrees of criticism and vitriol on social media and, as a journalist, one quickly learns to develop a thick skin, as unfortunate as that is.

“But in recent years, the general, often gender-specific abuse, has escalated markedly. The online and real abuse of women journalists has been an issue that has received attention from both international and local human rights bodies and press freedom organisations.”

In July last year, the United Nations special rapporteur on gender justice and freedom of expression, Irene Khan, released a report on this issue, said Maughan.

Following the Zuma Foundation’s announcement of Zuma’s private prosecution, and the subsequent tweets by Manyi and Zuma-Sambudla, Maughan said she had become “the target of an unprecedented level of social media abuse, much of it directed at my gender”.

The attacks, she added, “also appeared intended to serve as a threat to journalists in general — to intimidate journalists covering Mr Zuma’s trial and political project, and to discourage them reporting on events in a critical and independent manner, insofar as that reporting does not please Mr Zuma, his representatives and supporters”.

Part of the campaign, said Maughan, was the summons, which was “a gross abuse of the court process obtained for an ulterior purpose.

“It is a cynical attack on the right to freedom of expression and a free media, which is the lifeblood of our constitutional democracy, and which is protected by section 16 of the Constitution.

“Indeed, Mr Zuma’s conduct in issuing this summons, given the circumstances set out in this affidavit as a whole, breaches his obligations in relation to the right to freedom of expression and free media contained in section 16 of the Constitution.” DM

Disney reaches deal with activist investor Third Point, will add former Meta executive to its board