United Airlines revealed Wednesday it grounded about 25 of its Boeing 777-200 planes – just days before one of them was forced to turn back only minutes after taking off.

United grounded dozens of the planes after realizing that some of its aircraft had not undergone required inspections of the front edges of the wings.

It led to the airline canceling flights on Monday night and Tuesday morning. Those passengers affected were rebooked.

But on Wednesday night, a plane that had been cleared to fly was forced to turn back after taking off from Newark Airport in New Jersey following an issue with its hydraulic system.

The FAA has launched an investigation into the incident and United has not commented if the issue is at all connected to the grounding of similar aircraft.

The Federal Aviation Administration explained how United grounded 25 of the jets after discovering it had failed to inspect slats on the wing edges that are used during takeoffs and landings.

The FAA said United reported the issue, and the FAA is reviewing circumstances that led to the missed inspections.

United said earlier this week afternoon that it had inspected 10 of the planes and was working with the FAA to return the others to flying in the next two weeks without causing additional flight cancellations.

‘We’ve completed inspections on 10 of those aircraft, and are working with the FAA to return others to service while inspections are ongoing over the next two weeks,’ United said in a statement.

The FAA said it was reviewing United’s inspection plan ‘as well as looking into the circumstances that led to the missed inspections.’

In May, the FAA cleared United’s 52 Boeing 777 planes equipped with Pratt & Whitney (PW) 4000 engines to return to service.

The jets were grounded after the failure of a Pratt & Whitney engine on one that caused parts of the housing to fall on the Denver area. 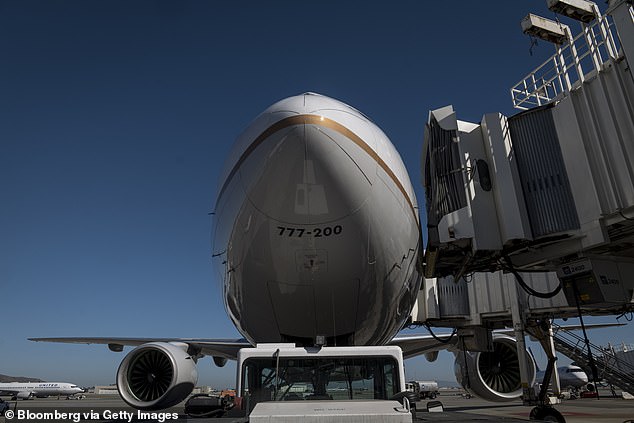 United Airlines discovered it had failed to perform required inspections on the wing leading-edge panels, the FAA, a U.S. regulator said

The United flight to Honolulu suffered engine failure and showered debris over nearby cities and made an emergency landing in February 2021.

A loud bang was heard just four minutes after take off and pieces of the engine began to plummet to the ground over Broomfield, Colorado.

Jet engine parts were scattered around the entire suburb, with the entire engine inlet lip ending up in one piece in a resident’s front yard.

No one was injured and the plane safely returned to the airport.

United said that he wing leading-edge panel inspections of some of those 777-200s are not related to engines or recent engine work.

They said the inspections in most cases can be completed overnight.

United’s Boeing 777s are some of the oldest models of their kind in the world.

The 777 planes seat between 276 and 364 passengers, according to United’s website, and are mostly used on long international flights. 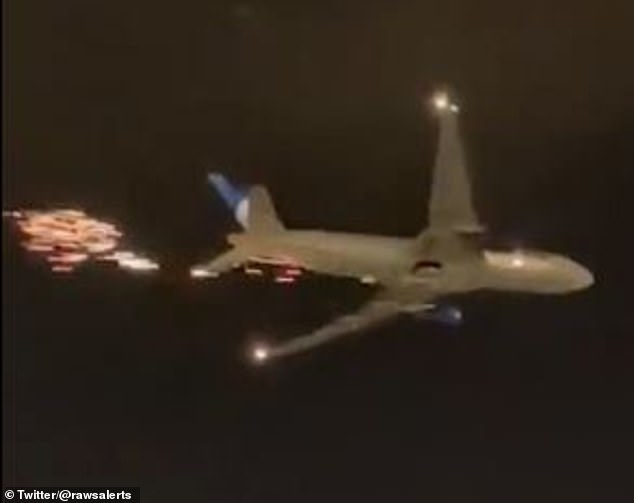 Meanwhile, the FAA has launched an investigation after a United plane was forced to make an emergency landing when a shower of sparks flew off and debris fell to the ground moments after taking off from Newark Airport in New Jersey.

The Boeing 777-200ER, which took off from Newark heading for Sao Paulo, Brazil, at 11.24pm on Wednesday night had to enter a holding pattern at 24,000 feet over the Atlantic Ocean after experiencing what is suspected to be a hydraulic pressure pump failure on landing the landing gear.

Approximately an hour and a half later, after dumping fuel over the ocean to reduce weight, the aircraft made a safe emergency landing back at Newark Airport.

The FAA have now confirmed they are probing the cause of the malfunction.

The terrifying moment was purportedly caught on video by a nearby plane spotter, who captured the shower of sparks streaming from close to the landing gear compartment of the Boeing 777.

He also took a photograph of a piece of rectangular, rusty-looking piece of debris that fell to the ground.

Despite the dramatic scenes, the plane landed safely after the crew reported an emergency and that an investigation is under way.

There were no reports of any casualties or injuries among the crew and passengers. 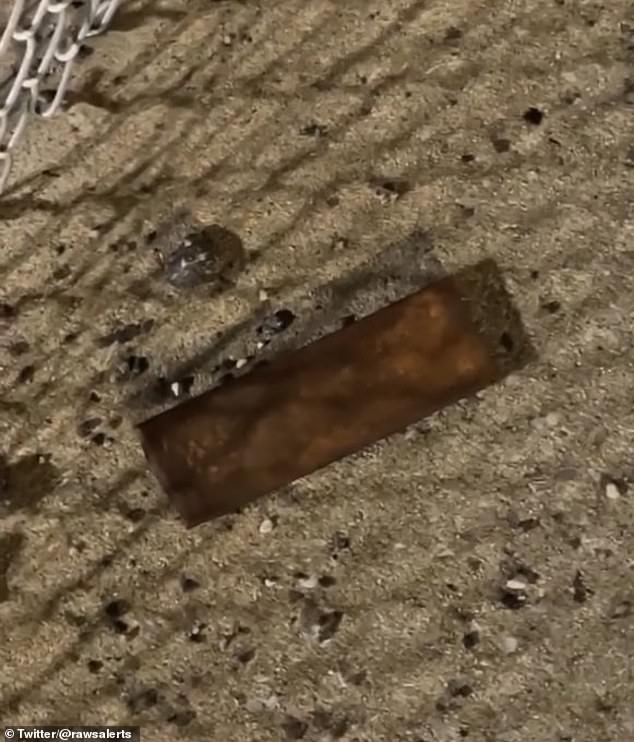 A photo of the debris that fell from the plane was captured by a nearby plane spotter. The Federal Aviation Administration confirmed they are investigating the incident

In a statement, United Airlines said: ‘After our aircraft experienced a mechanical issue shortly after takeoff, it remained in the air to burn fuel and then landed safely.

‘Passengers deplaned at the gate and a new aircraft is scheduled to depart this morning.’

‘The flight departed Newark and was headed to São Paulo, Brazil before it returned. The FAA will investigate.’

Primary hydraulic power for the left and right systems is provided by two engine-driven pumps and supplemented by two on-demand electric motor-driven pumps, according to power company Eaton. 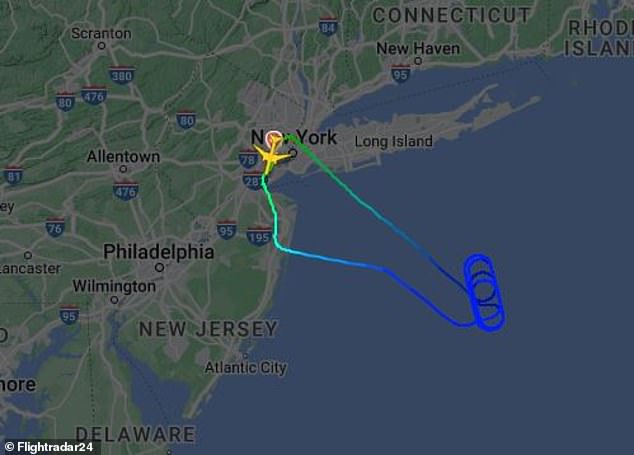 The flight map shows flight UA149 entering a holding pattern at 24,000 feet over the Atlantic after experiencing what is suspected to be a hydraulic pressure pump failure