Meena Harris, niece of Vice President  Kamala Harris, revealed last year that her husband gave up his high-flying tech job in San Francisco to be a stay-at-home father to their two daughters, and free her to write feminist children’s books and run her business.

Harris, now 37, told The Times in January 2021 that Nikolas Ajagu – who she met while working in the tech industry – decided he wanted to be a full-time father to Amara and Leela.

Ajagu left his job as the Global Head of Partnerships at Facebook to raise their children, she told the paper.

On the day of the inauguration won praise from sneakerheads for his stylish $2,000 Dior Air Jordan 1s.

‘We do not ascribe to the traditional gender role thing in our house,’ she said.

Meena Harris, now 37, said her husband Nikolas Ajagu, who she met while working in the tech industry, decided he wanted to be a full-time father to Amara, four, and two-year-old Leela 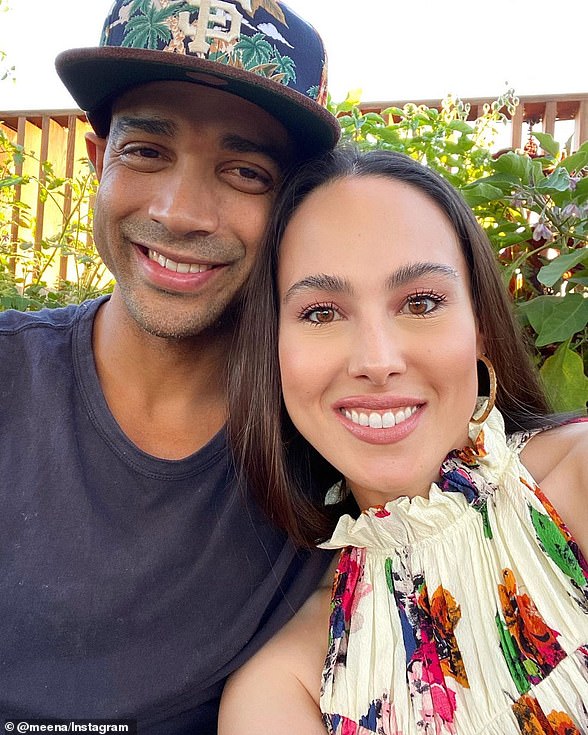 Meena Harris and her partner Nikolas Ajagu are parents to Amara, four, and Leela, two 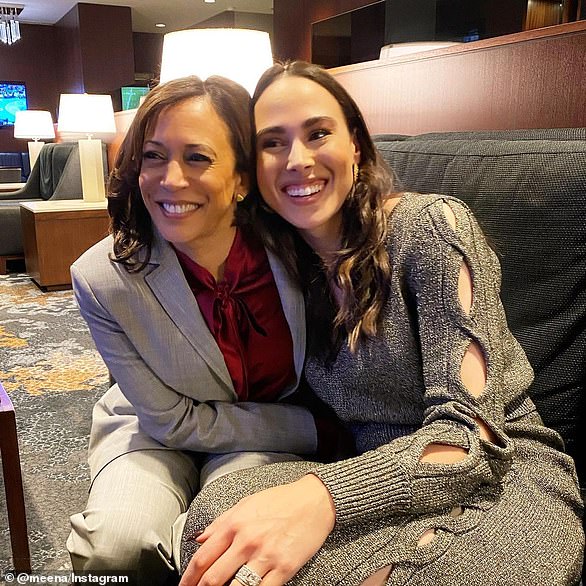 Meena Harris is pictured with her aunt Kamala – the first female, black and South Asian VP 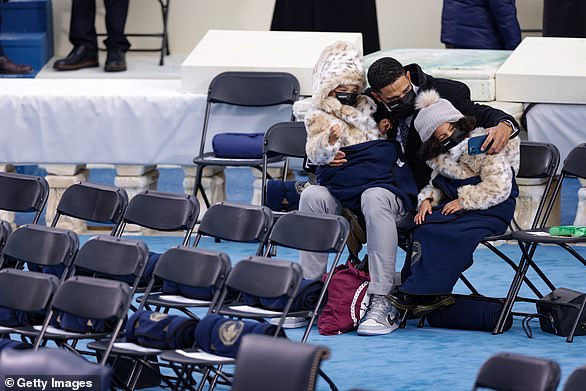 ‘Thinking about how I am raising my kids and how I can pass on the lessons and value systems that I was raised with, I do wonder how I am going to do it.

‘We let some men in along the way – my kids aren’t growing up with an all-female family.’

Meena was raised by women alone, and told the paper she had ‘only come to realize, over the course of my life, just how unique my upbringing was’.

She added: ‘A feminist household is all I’ve ever known.

‘Even the idea of men in power wasn’t something I really learnt about until I got out into the world of work. Our little family unit was just women, fierce women: my grandmother, my mum, my aunt and me.’ 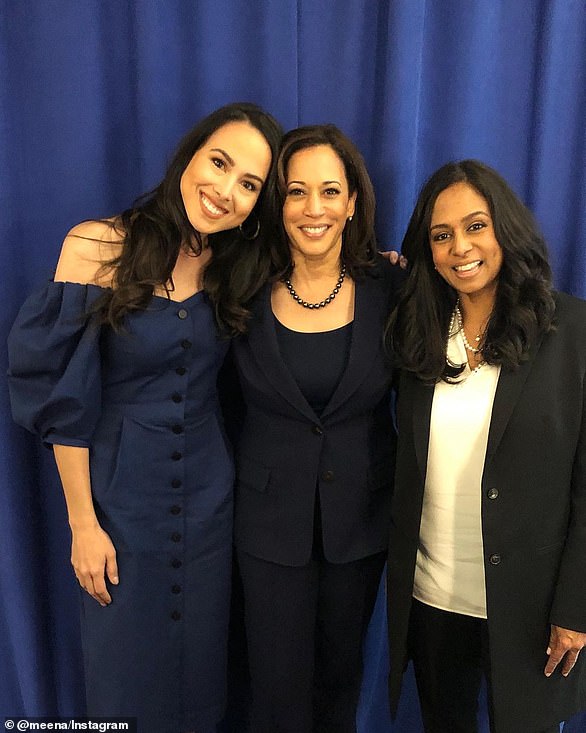 Meena, Kamala and Maya: the family was raised by Shyamala Gopalan, who died in 2009

Her grandmother was Shyamala Gopalan, who died in 2009.

She was a scientist and civil rights activist who graduated from the University of Delhi at 19, and, to avoid an arranged marriage, went to Berkeley to study endocrinology and nutrition, became a breast cancer researcher and served on the US President’s Special Commission on Breast Cancer.

She divorced her Jamaican husband, Donald Harris, when her daughters Kamala and Maya were seven and five, and raised them as a single parent in Oakland, California. 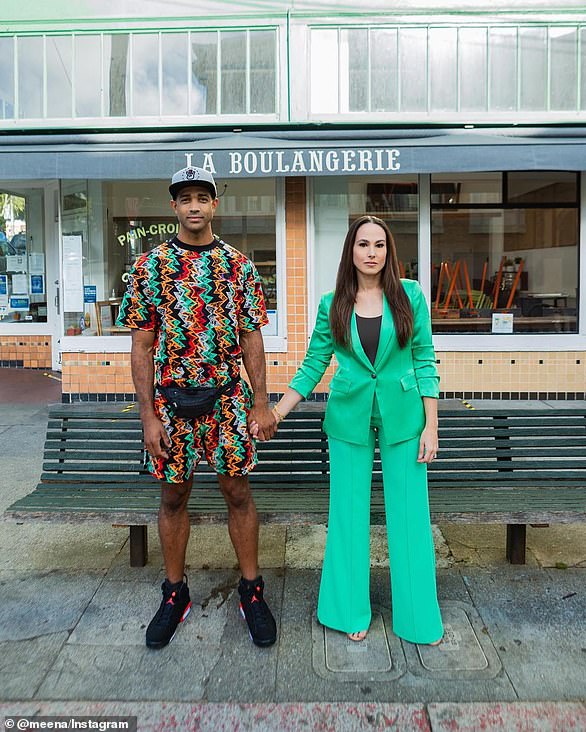 Meena met her partner while working in the tech industry, after training in law 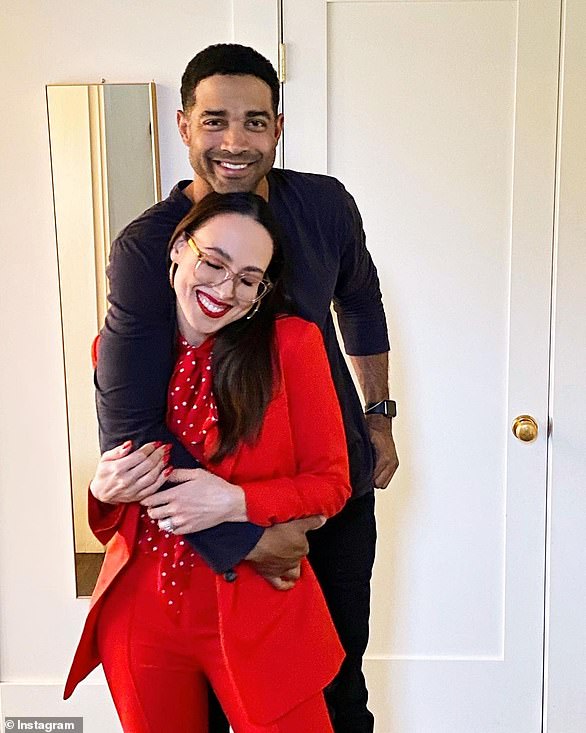 ‘That was my world,’ says Harris. ‘And as we added more people to the family, I was still very protective, and clear who raised me: that’s my family.’

She said her childhood home was a place of ‘love, laughter, food and politics, and giving a damn about what’s going on in the world’.

She said her grandmother ‘didn’t have a lot of patience for mediocrity’. 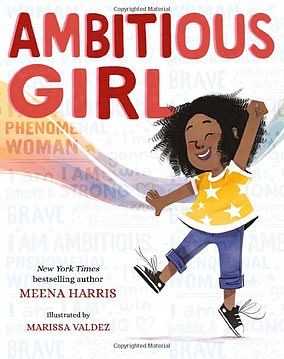 ‘There was definitely some tough love.

‘She always taught me, ‘You’re going to have to work twice as hard. Nothing’s going to be handed to you.’ And there was no coddling – we didn’t have a kids’ table on big occasions. You sat at the adults’ table.

‘My mum and aunt were raised in the same way, with an expectation that a child, no matter their age, can understand and can be a part of adult conversations. Or, at the very least, learn and listen.’

She graduated from Stanford and Harvard Law, and has previously worked in the policy departments of Slack and Uber.

Her first book, Kamala and Maya’s Big Idea, published in June last year, was based on her mother and aunt’s childhood, and contained lessons about activism and community-building.

She says that her new book, Ambitious Girl, is designed to inspire young children. 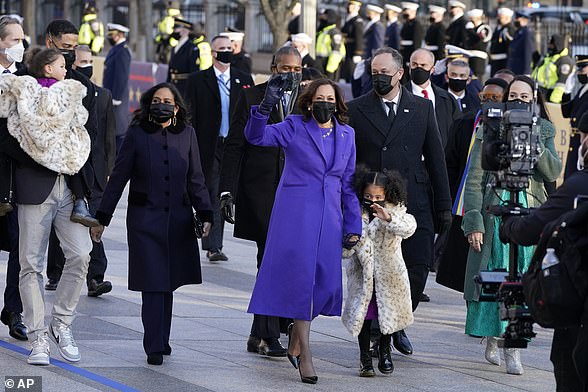 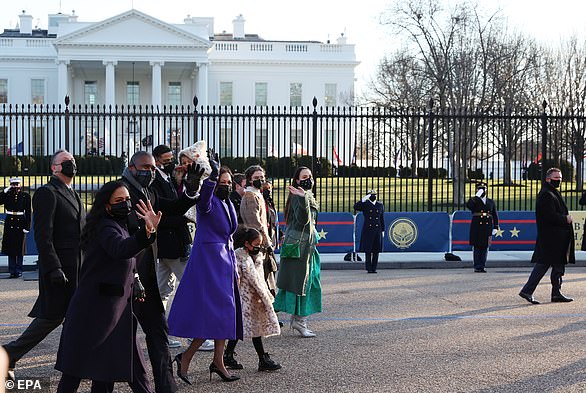 ‘Growing up, I was taught that ambition is something to celebrate, that it means purpose and determination, having a big idea and running after it, chasing your dreams and having confidence in yourself,’ she told the paper.

‘When I got older, I realized that is not what society teaches us. Instead, it is something used to critique women: ambitious women are ‘power-hungry’ or ‘sharp-elbowed’ – things we do not say about men.

‘It’s something that I think women are taught to hide.

‘I know lots of women who have political ambitions and want to run for office, but they feel that they’re not supposed to tell people, that you should downplay your big dreams. As women, we’re taught to hide ambition, diminish it or keep it secret – that it’s something to be ashamed of.’

Her aunt’s election to vice-president is, Meena said, a boost for all women who have been told they were ‘too much’.

Trump targeted: A look at the investigations involving the former president; from Russia to Mar-a-Lago

This CEO developed what's been dubbed Asia's Tesla of scooters. Here are his top tips