In this file photo from March 2020, members of the Arizona National Guard distribute food in Mesa, Ariz., in response to surging demand due to the COVID-19 pandemic. 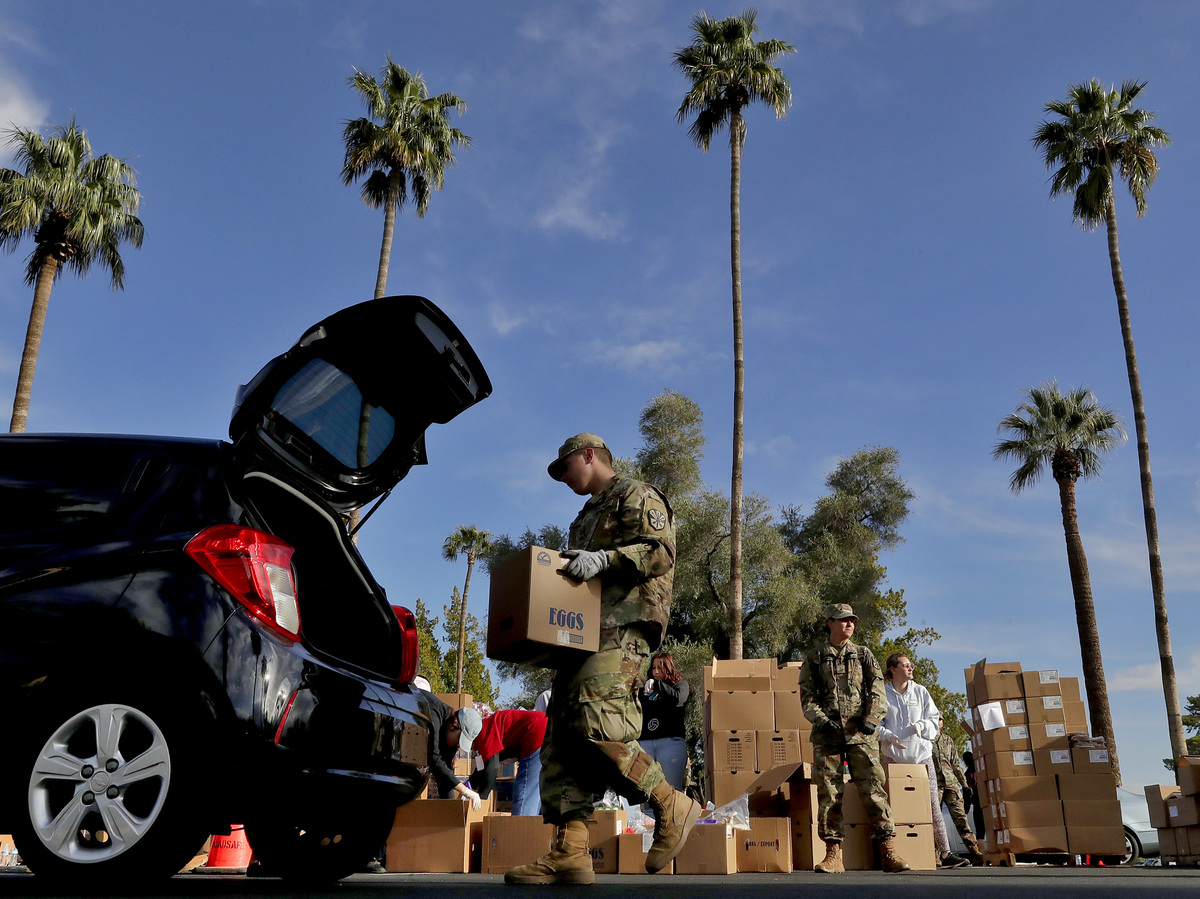 In this file photo from March 2020, members of the Arizona National Guard distribute food in Mesa, Ariz., in response to surging demand due to the COVID-19 pandemic.

When he looks out his window at Mesa, Arizona’s city hall, Mayor John Giles can see tangible signs of how the COVID-19 pandemic has hurt his community.

From his perch, he can see the city’s convention center, which has become a hub for those seeking help. Sometimes, there are lines a thousand cars long, with people coming to pick up food from a food bank. Other days, it’s people lined up for COVID-19 vaccines.

“It’s a pretty sobering view from the mayor’s office,” Giles said in an interview with NPR.

That’s why Giles, a Republican, is lobbying Republican members of his state’s congressional delegation to accept that the $350 billion in state and local funding in President Joe Biden’s $1.9 trillion pandemic aid package should not be thrown overboard, as it was during the last round of relief negotiations.

Biden’s White House has found common cause with Republican mayors and county commissioners, highlighting it to bolster their claim that the COVID-19 proposal is “bipartisan,” even as there’s little sign Republicans in Congress will back the plan.

On Friday, he has invited a bipartisan group of local and state elected officials to the White House, including mayors from Miami, Arlington, Texas, New Orleans, Atlanta and Detroit. It’s part of a series of events he has used to sell his plan to the public. Next week, Biden will travel to Wisconsin for a televised town-hall style event to discuss his proposal.

Back in Mesa, Giles said he just wants to see the “silly partisan gamesmanship” be set aside so that his city can get help with the long list of supports it provides to residents grappling with the fallout from the pandemic — help with rent, utility bills, food, COVID tests and vaccine distribution. “Everything that’s important to the country right now is happening at the local government level,” said Giles.

If you didn’t know Giles was a Republican, it would be easy imagine the pitch he’s making coming from someone in the Biden White House. Yes, it’s a lot of money, he said, and certainly the debt and deficit are a concern in the long term. But right now, this Republican mayor said there is an urgent need.

It comes in contrast to congressional Republicans who say U.S. taxpayers shouldn’t be bailing out cities and states for poor planning and bad decisions made over the years.

As part of the CARES Act passed early during the pandemic, Giles said Mesa got $90 million from the federal government in March, money used for new expenses that arose as a result of the pandemic. It is long gone now.

“At the end of the year, we could have frankly turned in receipts for twice as much tied to all the pandemic-related expenses that we were incurring,” said Giles.

The much-smaller city of Scranton, Pa., didn’t see its share of CARES Act funding until November and December, said Mayor Paige Gebhardt Cognetti. It was enough to pay for some personal protective equipment and extra IT resources needed for people to work from home, but Scranton is still facing a large hole in its budget caused by the pandemic.

Scranton also has had miles-long waits at food banks. “That remains a huge issue,” said Cognetti, a Democrat who is eager to see the relief as proposed in Biden’s aid package.

Cognetti was one of a handful of mayors to meet last week via Zoom with Treasury Secretary Janet Yellen — just one of many examples of outreach from the Biden administration to local governments. Cognetti said Yellen wanted to discuss how to make sure aid got to people most in need.

“I think there could be a real gap between what happens in Washington and what happens at the kitchen table or the mailbox or in the email inbox of someone working two or three jobs and trying to raise their kids,” Cognetti said.

More than 400 mayors signed on to a letter drafted by the U.S. Conference of Mayors urging direct aid for local governments and have begun sending individual letters directly to members of Congress.

What does Zillow's ShowingTime acquisition mean?

1 day ago
Check Also
Close
Featured Posts
Column: Who else has been terrorized and killed by police where Ahmaud Arbery was murdered?
21 mins ago