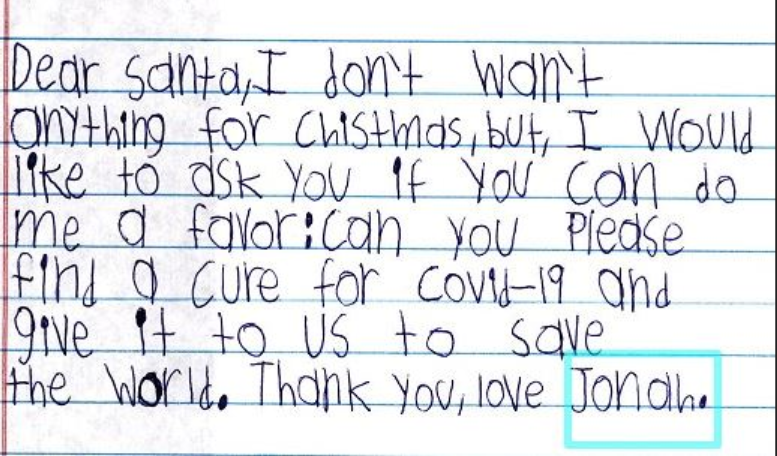 Jonah doesn’t want anything for himself this Christmas. Instead, he asked Santa “to find a cure for Covid-19 and give it to us to save the world.” Other children hope Santa and his elves are staying healthy. Yadhira wants help with her family’s bills.

Every holiday season, children write to Santa, scribbling down which toys they want and any burning questions they may have onto letters for mailing to the North Pole. And every year, the U.S. Postal Service makes these letters available for anyone to “adopt” through its Operation Santa program in order to help make these holiday wishes come true. 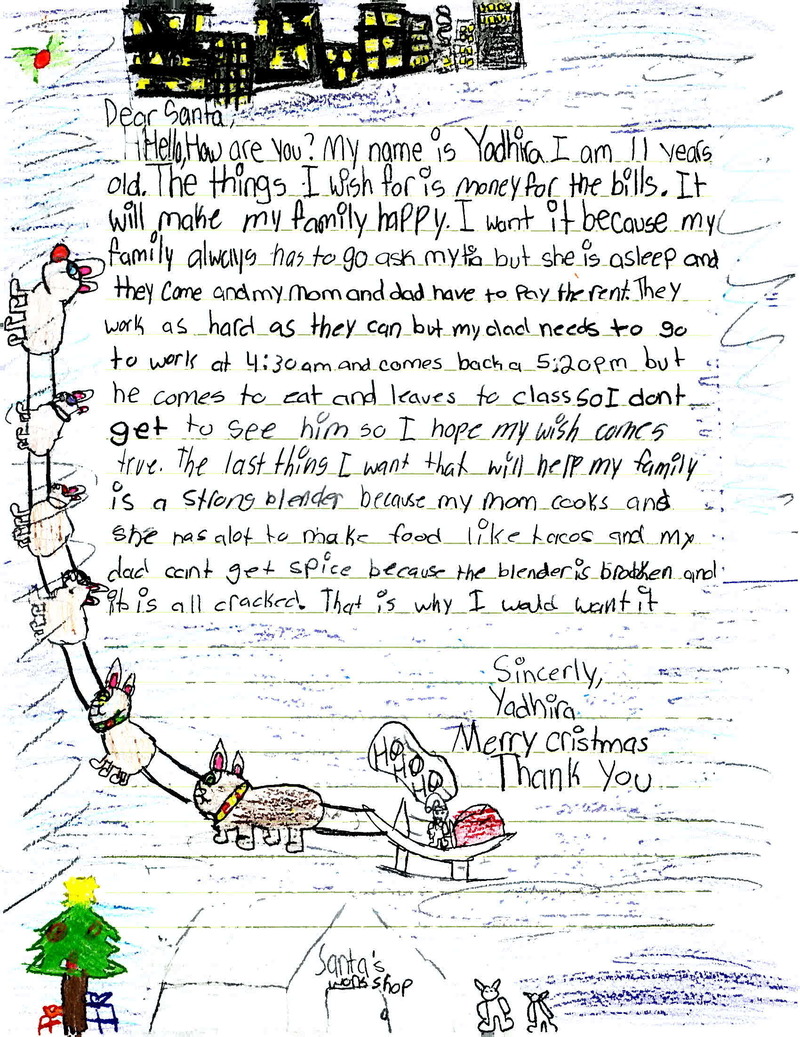 In non-pandemic times, these letters reflect typical childhood desires and imaginations — lots of tech gadgets, scooters, puppies and dolls. But this year, the letters offer a unique glimpse at the psyche of children toughing it out through a crisis unlike anything they’ve experienced before.

Kids everywhere have had to miss out on school and friendships. Millions have seen parents lose jobs, while others have watched loved ones get sick or even die. For many of these children, holiday worries this year have extended far beyond whether they have been naughty or nice. 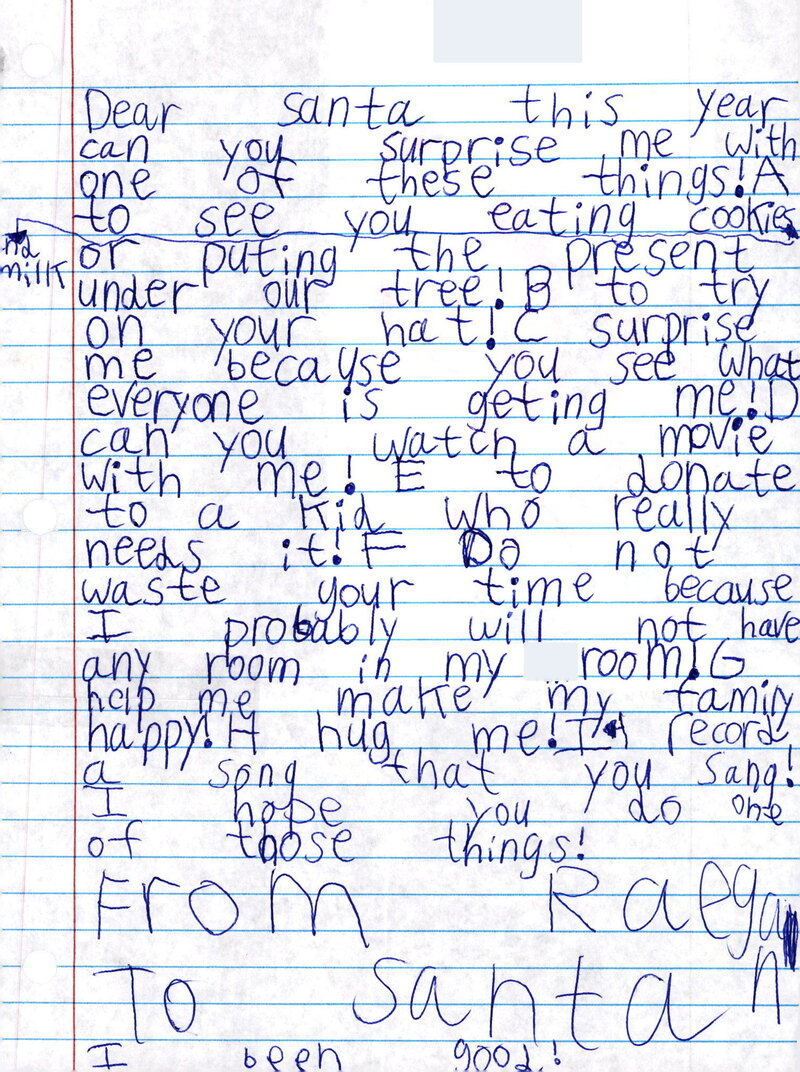 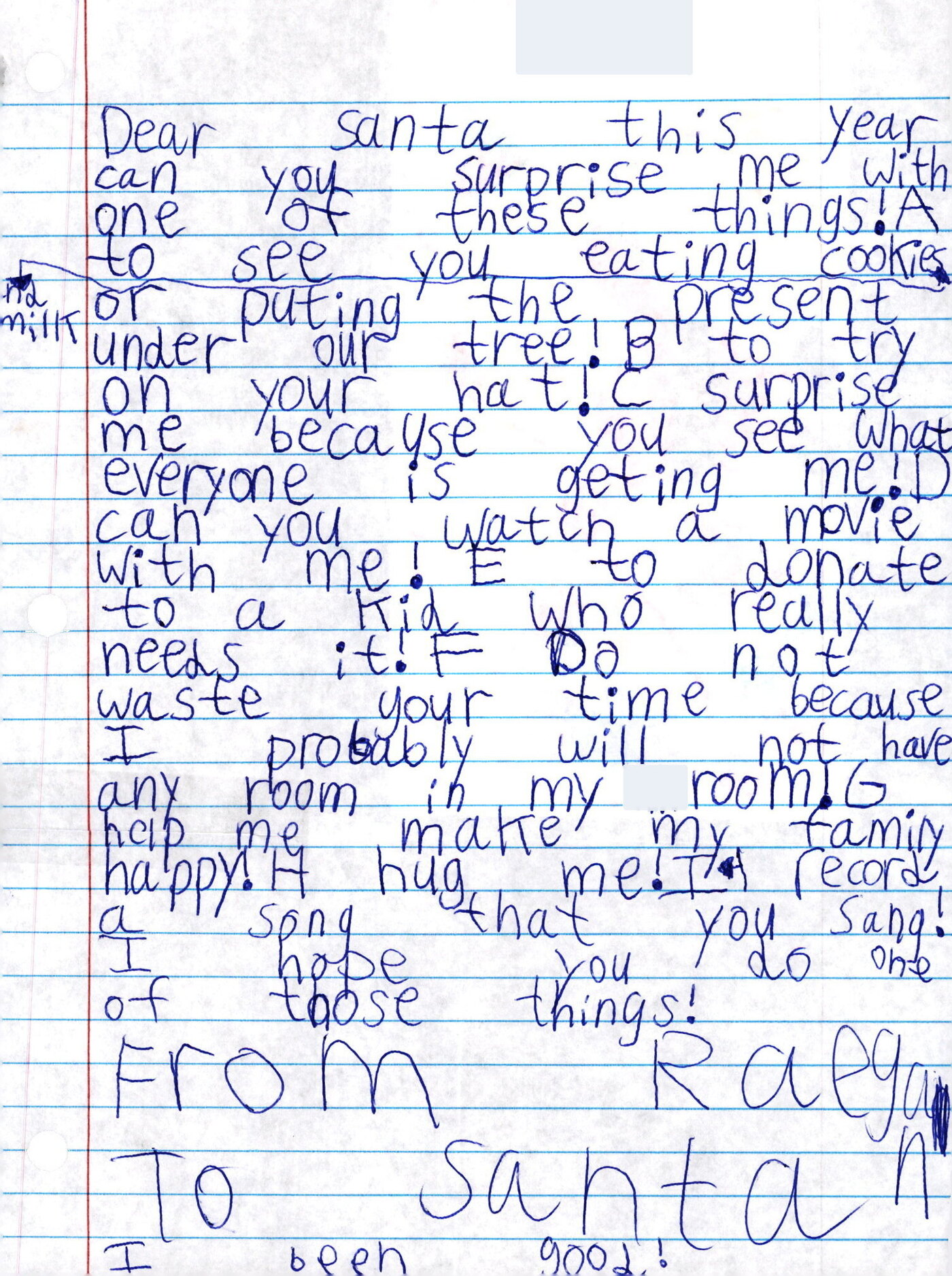 Operation Santa expects to receive a record surge in letters this year — and not just because it’s the first time in the program’s 108 year history that the Postal Service has expanded it nationwide.

“In times of stress or crisis, you will get an extra uptick in letters,” said Operation Santa spokesperson Kim Frum. “As an example, the 2007-2008 recession — in times of hardship like that — we got an increase in letters,” she said.

While most of the letters that have come in this year can be described as carefree requests for presents, officials behind the program say they’re not surprised by some of the more gut-wrenching appeals in some of them. As of Friday morning, more than 23,000 of the letters had been adopted, and USPS continues to refresh its site with new letters each day. 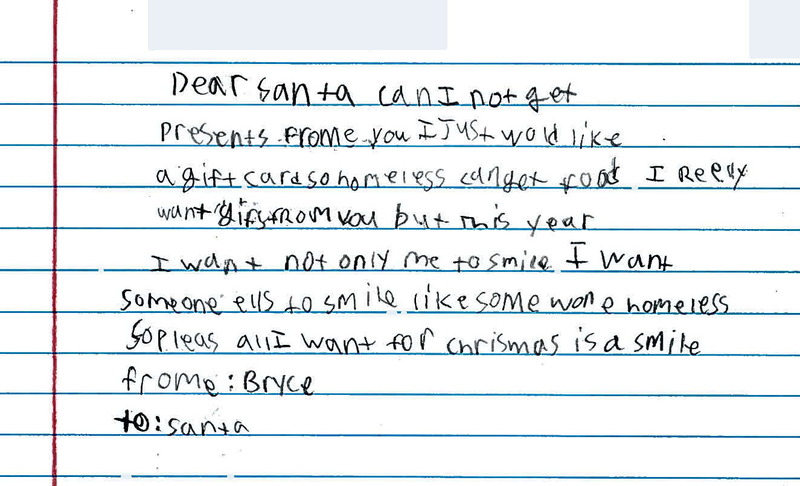 Psychologists say pandemic stressors are taking a toll on the mental health of children. In socially distanced environments, kids are suffering from loneliness, as well as high levels of anxiety and depression.

Erlanger Turner, a clinical psychologist who specializes in parenting and child behavior, says letters to Santa can be a beneficial exercise for kids’ mental health.

“Narrative therapy approaches, where we write out our feelings and emotions and experiences, is really helpful,” said Turner. “You could definitely see in the letters that kids are witnessing stress that their parents are feeling, in terms of financial concerns.”

Turner said homelessness was a theme he noticed in several letters he read. In some, he pointed out, children were “wanting Santa to bring them things that they could even donate to make those individuals feel happy.”

In one letter, for example, Bryce asks for a gift card so someone who is homeless can get food: “I want someone else to smile.”

“Children are either experiencing hard times in their own families or just witnessing things in their communities,” Turner said.

The letters to Santa, he added, can provide a starting point for families to begin talking about some of these difficult subjects.

“Sometimes parents don’t even mention those things or have conversations with them about their financial struggles, but kids see things,” said Turner. 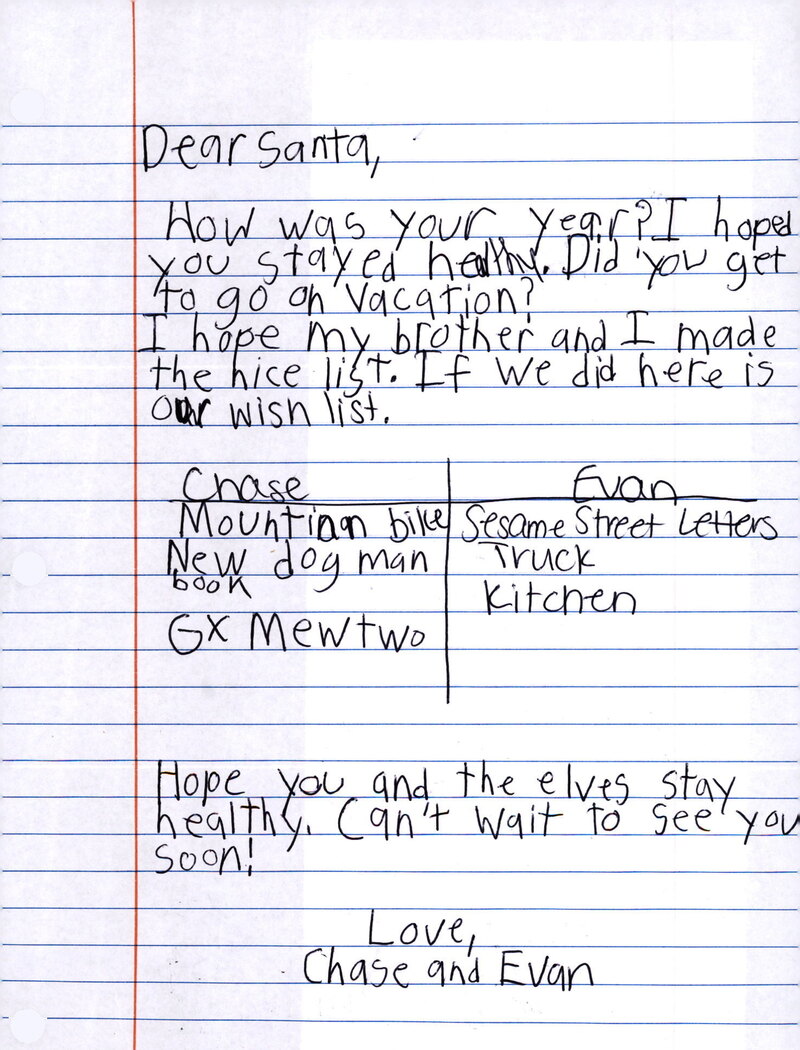 A Santa’s helper pays it forward

If a letter to Santa Claus can be a window into a child’s thoughts, it also creates an opportunity for someone to lift the author’s spirits in difficult times.

To this day, Damion DiGrazia is driven by the thoughtfulness behind a gift he received through Operation Santa.

DiGrazia had been living in low-income housing with his two siblings and his single mother when she told him he should write a letter asking Santa for two things — “just in case Santa can’t get one or the other,” he recalled.

He wanted an alarm clock — to help him “be more independent” — and a radio for entertainment. When Christmas arrived, he got something he couldn’t even imagine he wanted: a two-in-one alarm clock radio.

“It was the best thing ever,” said DiGrazia.

About five years ago, he started his own Operation Santa spinoff program, eventually leaving his career on Wall Street. He founded Santa’s Knights, a nonprofit in New York City’s Harlem neighborhood that runs its own holiday letter adoption effort.

Earlier this month, a letter with a distressing request landed in his inbox.

Eight-year-old Morgan wrote, “This year has been hard for my family. We had to leave our house. Could you help Santa?”

Morgan’s mother, Jeanine Campbell, was searching for charities that might help give her young daughters a merrier holiday when she discovered DiGrazia’s site. That’s when she helped her two girls, London, 3, and Morgan, write a letter to Santa. The family is asking for warm clothes, diapers and Barbies. 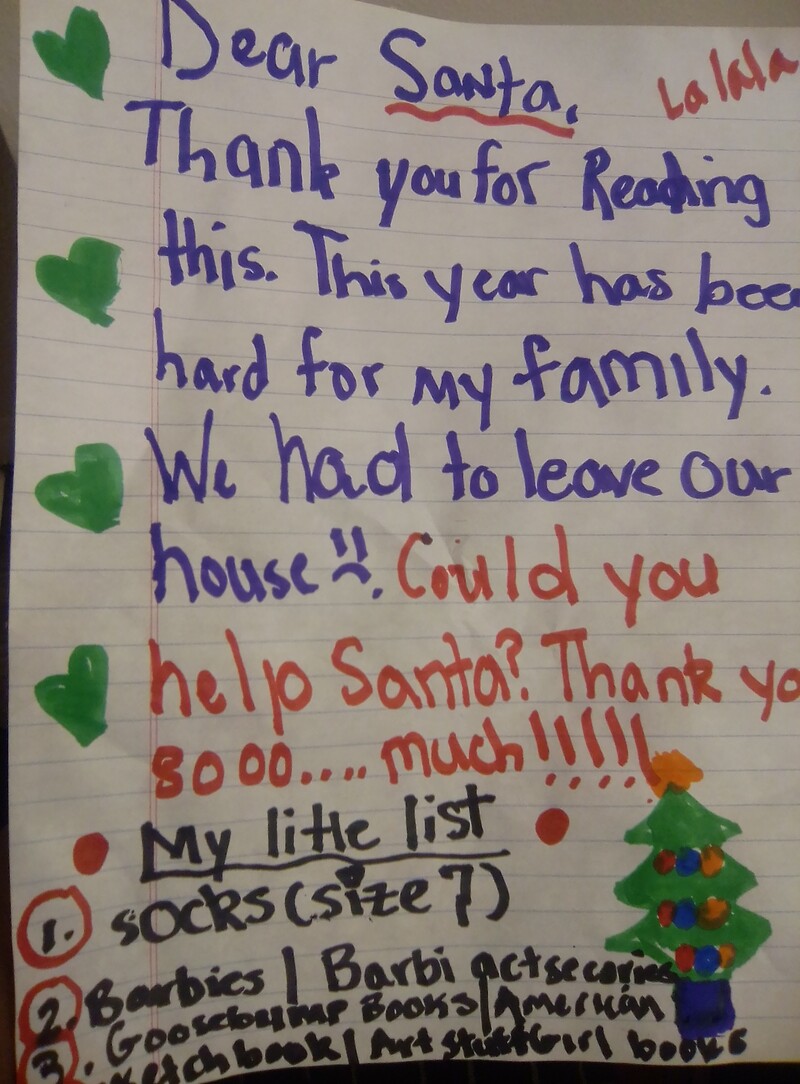 Morgan, 8 years old, wrote to Santa for the first time in what became a difficult year for her family due to the pandemic.

Money has been especially tight in the past several months for the single mother, who says she’s relied on local food pantries to eat. In March, Campbell, a teacher from St. Petersburg, Fla., lost her second job — helping kids at an after-school learning program — when classes went virtual. Then, over the summer, the 33-year-old said she emptied her savings to pay for a move into an apartment after their home in Tampa Bay house was condemned.

But a reply from Santa’s Knights was a bright spot amid the stress.

“I was very blessed when I got an email that said that they would do whatever they can to help the kids,” Campbell said. “I was overjoyed.”

Campbell is overcome with emotion when she thinks about the excitement Santa could bring her daughters this year.

“They keep asking me, ‘Mommy, did Santa get our letters?’ ” she said. “Before this happened, I wasn’t sure that they would have anything. It’s really moved me to be able to be so happy that, yeah, Santa’s going to get them — he’ll do what he can. I’m so grateful because I didn’t know, I really didn’t know that this was gonna happen.”

Christine Baranski Hails Stephen Sondheim as a Giant of Musical Theater: ‘We All Feel Like Orphans’
58 mins ago