Last summer, Lucy Le was killed on a street near her Virginia home by a neighbor backing out of her driveway. Her daughter, Laura Pho, now draws a new memorial to her mother every day on the pavement where she died. “It’s my meditation,” she says. “It’s my way of honoring her.” 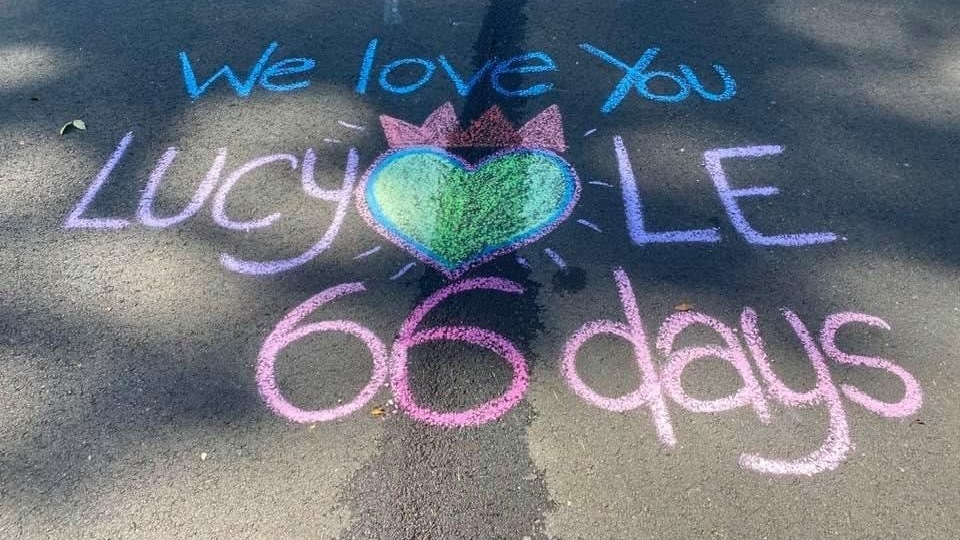 Last summer, Lucy Le was killed on a street near her Virginia home by a neighbor backing out of her driveway. Her daughter, Laura Pho, now draws a new memorial to her mother every day on the pavement where she died. “It’s my meditation,” she says. “It’s my way of honoring her.”

Every day, Laura Pho walks outside her home and creates a new memorial — a chalk drawing, usually of a heart — on the patch of pavement where her mother died last summer.

“I can see it from my office window,” Pho says. “It’s nice to be able to see just these bright, beautiful drawings that remind me of my mother, who was also bright and beautiful.”

Pho’s mom, Lucy Le, was out for her daily meditative walk when a neighbor backing her SUV out of her driveway struck and killed her. Pho ran out immediately to the scene, and her life “shattered into a million pieces,” she says.

Lucy Le’s death was part of a tragic trend. According to a report from the Governor’s Highway Safety Administration, which tracks pedestrian fatalities, America’s roads are getting deadlier.

And in the first half of 2020, while driving was down because of the pandemic, the pedestrian death rate — the number of people struck and killed compared to the number of miles driven — soared by 20%, putting 2020 on track for the largest one-year increase in the death rate ever.

Speed undoubtedly plays a factor in that spike. With fewer cars on the road during the pandemic, some drivers chose to to speed, with sometimes deadly consequences.

But other factors predate the coronavirus, and have contributed to pedestrian deaths for years now.

“It’s also lack of infrastructure,” says Russ Martin, the senior director of policy and government relations at the GHSA. “It’s also the safety of the vehicles that are out there on the roads.”

Larger vehicles, like the popular SUVs and trucks that dominate new car sales, are more dangerous for pedestrians than sedans. Meanwhile, the federal government doesn’t mandate safety tests that consider pedestrian safety, only those that protect vehicle occupants.

In addition to releasing preliminary statistics for 2020, the GHSA also took a deep dive into figures from 2019 and before. The group reports about a third of pedestrians were intoxicated when they were struck, and deaths are more common at night and in warm states (possibly because warmer weather encourages nighttime walking).

This year, for the first time, the GHSA also broke out data by race and found Black, Native American and Hispanic people were substantially overrepresented in pedestrian deaths, compared to their proportion of the overall population.

That trend, too, predates the pandemic. But Naomi Doerner, the director of equity, diversity and inclusion at transportation consulting firm Nelson Nygaard, notes the disparities of the pandemic affected pedestrian vulnerability, too.

“A lot of people who could not stay home are essential workers,” she says. “A lot of those workers are comprised of people of color … and we know that a lot of those folks are transit riders, pedestrians or bike riders.”

“Every number that you read about is a family like mine,” says Amy Cohen, whose son Sammy was struck and killed by a vehicle in 2013. “My son was 12. He was in eighth grade. He would be in college now. He deserved a chance to grow up.”

After Sammy’s death, Cohen co-founded a group called Families for Safe Streets that provides support to victims’ families and advocates for policy changes to reduce traffic deaths. Slower speed limits and street redesigns like wider sidewalks, narrow roads and rumble strips are among the group’s priorities.

For Pho, the months her mother’s death since have been anguished, her grief compounded by painful legal and criminal proceedings, and by the wave of anti-Asian harassment unfolding during the pandemic.

But she said she’s found it healing to reach out to local advocacy groups like Cohen’s that are working to make streets safer.

“It’s a trend that’s just going to continue if we don’t address it,” Pho says. “It is a crisis.”

‘Peter Rabbit 2: The Runaway’ Review: Beatrix Potter’s Bunny Is Back, Rehabilitated in This Sure-footed, Superior Sequel