The following conversation reveals the killer in Hulu’s “Only Murders in the Building,” plus some other things you might want not to know. Spoilers abound! You have been warned.

“Only Murders in the Building,” in which podcast-obsessed trio Steve Martin (as reclusive one-time TV star Charles-Haden Savage), Martin Short (as flamboyant, failing theater director Oliver Putnam) and Selena Gomez (as mysterious young person Mabel Mora) team up to uncover “Who Killed Tim Kono?,” delivered its solution Tuesday in a splendid, suspenseful, sometimes slapstick finale. (A second season, happily, is ordered.) Times TV critics Lorraine Ali and Robert Lloyd, who are fans of the show, get together here not to debate but to celebrate its merits. Anyone looking for an argument will have to search elsewhere.

Robert Lloyd: Let’s make it very clear, one more time, that if you haven’t watched “Only Murders” to its conclusion, the killer of Tim Kono (Julian Cihi) is named below, so turn back now — unless you are the sort of person who skips to the end in books, or plans never to watch, or simply doesn’t care. In which case, carry on.

One could be excited (I was) and yet legitimately unsure about a project starring two men in their 70s (and co-created by one, Martin, with John Hoffman). First, because we are accustomed to comedians and comic actors losing their spark or simply being overtaken by changing tastes; and second, because when famous people get involved with streaming platforms, which are likely to offer them unfettered control in exchange for their prestige, things can get self-indulgent and wayward. (Especially with so many episodes to fill.) But “Only Murders” sparkles from top to bottom.

If disbelief must be sometimes, not suspended, but just pushed a little to the side, the show is tightly plotted; the characters, if structurally familiar — lonely clashing personalities finding mutual purpose — are original in execution. And Steve Martin and Martin Short have channeled their energy in ways that feel far from geriatric (while making jokes the whole time about being old, or in Short’s case, claiming not to be).

Lorraine Ali: Yes! Old-guy tropes find new life in this series thanks to these characters and the actors who play them. Reclusive Charles is the former star of the 1980s detective drama “Brazzos” and director Oliver hasn’t had a Broadway hit in years, perhaps decades. They are woefully out of touch with their much younger Arconia neighbor/sleuthing partner, Mabel. She’s exasperated that they sign their texts and associate TikTok with the sound of a clock. The Hulu show played with that changing-of-the-guard dynamic in such fresh and fun ways that it became a large part of what made this series such a joy to watch. And what do they all have in common? They’re obsessed with a true-crime podcast. As a fan of true crime, I can honestly say this series successfully validated and made fun of my embarrassing fixation with playing the armchair detective.

The trio knew Kono did not commit suicide based on their “experience” with the podcast “Not All is OK in Oklahoma,” hosted by Cinda Canning (Tina Fey). Fey is one of many inspired casting choices over the streamer’s nine episodes, including murder suspect Sting, played by Sting, exasperated Da’Vine Joy Randolph‘s NYC Detective Williams (“*#[email protected]! Not more true-crime fans”) and Jane Lynch as Martin’s former “Brazzos” stunt double, Sazz. She explains to his befuddled friends that their builds are so similar that she even doubled for Charles in sex scenes. I howled when they were on screen together. The show works on so many levels — it’s funny, fast-moving and as you said, the story is tightly woven. It also gave us, the viewers, a mystery to chew on. Amateur investigators watching amateur investigators. So. Damn. Smart.

Lloyd: Not just one mystery to chew on, but multiple mysteries including the death of Zoe (Olivia Reis) a decade before, for which Oscar (Aaron Dominguez) was wrongly convicted. I’ve always had a problem with mystery stories in which the killer is revealed to be the person you could not have conceivably suspected, or the person you really didn’t want to be guilty, who had seemed very nice until the last-minute flip. Amy Ryan’s bassoonist Jan, who starts a relationship with Martin’s Charles and turns out to have killed Tim Kono, qualified — I was really hoping it would be someone else, if only for Charles’ sake, though really there was no one else left who wouldn’t have been completely random — but Ryan managed it extremely well. And we got some excellent slapstick from a half-poisoned Martin in the bargain. That reveal reminded me of the first season of “The Good Place,” where Ted Danson turns out to be not an angel but a demon, and the Good Place really the Bad Place. Really, I thought the finale was just about perfect.

Ali: True, Jan was the usual unusual suspect. But I felt like they may have done that intentionally, to play with the ham-fisted history of scripted “Murder She Wrote”-type mysteries. All along I was thinking will they or won’t they go that route, or will it follow more of an unscripted, “Serial” podcast-type path. I didn’t mind it was the former. The ride itself was so amusing, and the chemistry between the three so unexpected, that I didn’t need a big whodunit reveal. And I agree about the ending. It was fantastic, bloodied tie-dye shirt and all. It’s a powerful launching pad for Season 2. And I’m excited to see more of Gomez. Her comedic presence was perhaps the biggest surprise for me.

Lloyd: For a lot of viewers, Gomez will be the less-known commodity — though she is, of course, a big, multimedia star among younger generations and has been since she was a kid on “Wizards of Waverly Place.” But her performance really is key to the show, quiet and interior but also wickedly funny; her downbeat affect through much of the series is a sort of bridge between two professional comedians. Though she’s as in need of connection of any of them, she’s also the most grounded of the trio; she keeps it from turning into the “Three Stooges Meet the Anconia Killer.” (Or “Three Amigos,” for that matter.) She also gets the one romantic storyline that doesn’t turn sour. And the first-season ending seems to promise we haven’t seen the last of Randolph, who was so great in the Zoë Kravitz “High Fidelity” series — really, the great tragedy of its cancellation for me was not getting to see her arc fulfilled.

But tell me, Lorraine, as a person versed in the genre, how would you rate “Only Murders” as a podcast?

Ali: OK, here’s where I admit that I’m the worst kind of true-crime junkie — the sort who consumes the majority of their murderous fare on the ID Discovery network, A&E and Oxygen — but in between respectable HBO and Netflix docuseries, if that’s any consolation (I know, it’s not). Still, I’ll give the podcast-inside-the-show four out of five stars because it’s a colorful car wreck that mercilessly pokes fun at podcast culture — the sedated NPR voice, self-conscious musical interludes. If we’re lucky, Season 2 will feature Cinda producing a high-profile show about the murderous oddball trio from the Arconia, so a podcast about podcasters inside of a TV series. I’m already intrigued. 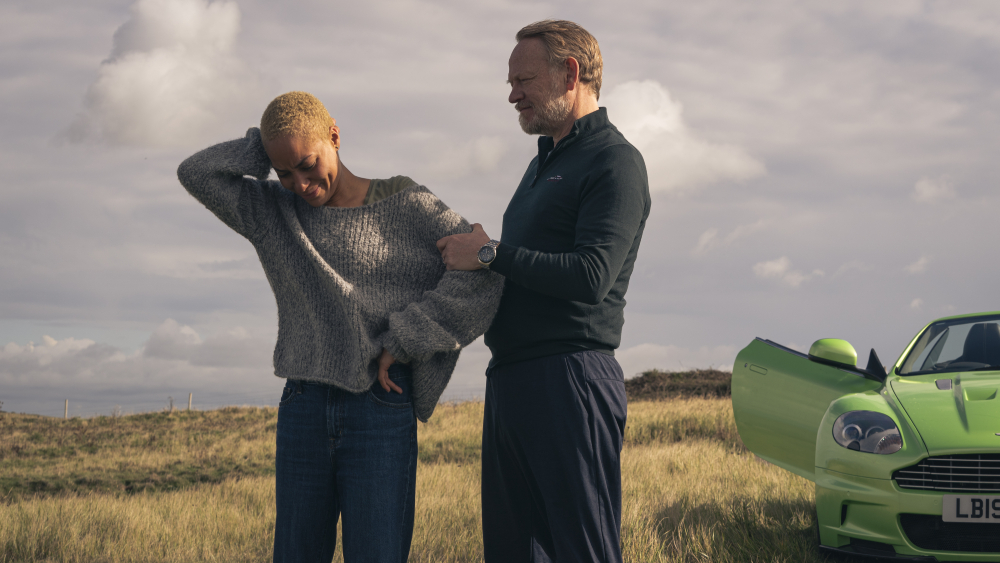 Column: Texas gerrymandering is all about keeping a grip on white power
45 mins ago

Why millions of German residents can’t vote
51 mins ago